In the next three weeks, I will be doing a sisterhood series here on the blog where I interview beautiful black women who inspire me. I want to share with you their journeys, their work, and their passion so that you too may be inspired.

Verona Spence-Adofo, the co-founder of Ancestral voices, a digital platform promoting research-based knowledge about African spirituality will be our first interviewee. With her husband Dalian Adofo, they conducted 7 years of research from which they have created a wide range of educational materials on the subject. This year commemorates 10 years of Ancestral Voices, so please join me in congratulating Verona and Dalian for their incredible accomplishments along the way, for their tenacity and hard work in putting African Spirituality on the map, and for their success. Click here to learn more about Ancestral Voices.

YF: What is Ancestral Voices?

VSA: Ancestral Voices is an educational initiative with a range of learning resources dedicated to the exploration of African spiritual philosophies and practices, with the aim to demystify and remove the stigma that surrounds these traditions by presenting factual information free from religious and colonial propaganda.

We started filming our first documentary titled ‘Esoteric African Knowledge’ in 2010. That is also when our social media presence was formed and ever since we have been using digital technology and other media to spread awareness around this subject. Our platforms have attracted a global audience including followers from the US, Canada, South Africa, and Australia.

YF: How did you fund it and what did it take in terms of other resources to make the project happen?

VSA: The first film ‘Esoteric African Knowledge’ was fully self-funded and consisted of mainly London based interviews. We had already planned a holiday to Ghana and decided to use that as an opportunity to get additional filming done. The filming and editing was all carried out by ourselves and took one year to make as we had to juggle filmmaking around our full-time jobs.

The initial documentary raises questions such as the impact of the media and colonialism on our perception of our ancestral spiritual traditions and includes interviews with traditional practitioners. The aim of the film was to open up the debate for a conversation that is often overlooked or dismissed as something that belongs in the past.

In 2013 we started filming the documentary sequel ‘Spirit is Eternal’. We kept coming into more information and felt it necessary to create a film that provided a clear understanding of the core philosophies found within African spiritual traditions, whilst providing practical information for those who wished to implement these teachings into their lives.

We again invested our own funds to secure trips to South Africa, Haiti, and the USA. The remaining funds were raised by crowdfunding donations which enabled us to film in Brazil and to assist with the remaining production costs. The entire process took a whopping 5 years to complete as we juggled the project around work commitments and raising our young family.

YF: Seven years is a long time. What made you embark on such a serious, long-term project and what kept you going?

VSA: The first film came about as a result of our own individual spiritual journeys that led us to question the ways of our ancestors. When I first met Dalian he was already practicing ancestral reverence for his grandmother. I was blown away as this was something I was learning about and recently implemented myself. So, to meet someone else who was also on the same path was amazing! Especially, as most people in my life were not open to this way of thinking. After having several conversations about African spiritual wisdom and how the information is contradictory to the negative propaganda, we decided that we should take what we’ve learned and create a film about it.

I have a video production background and Dalian is a qualified Teacher, who is also adept at ICT & Design so we combined our skillset to be able to produce the first documentary. Initially, we had no idea that this would be more than a one-off film. Although, the information we came into showed us the necessity for a sequel and the project objective we set for ourselves was huge.

What kept us motivated was a sense of purpose, we knew this was bigger than us. We felt that we owed this to our ancestors to put forward a body of work that would literally enable their voices to be heard after being silenced and stigmatised for so long. There were times when we felt overwhelmed, exhausted and going around in circles. We had hard drives crash on us and various technical issues, but we stayed with it and persevered. It was truly hard and we both feel that it was an initiation of sorts as it tested us on every level. However, we are grateful and honoured to have made it to the other side.

YF: I love that you took the entrepreneurial route to teaching us about African spirituality. What made you decide to do it that way?

VSA: We didn’t start out with that intention, but things naturally led us to this route. Initially, it was just the first documentary, which became a documentary series. Whilst completing the sequel we needed additional funds to help complete it, so we pre-released a short 15 min segment of the documentary titled “Rituals for Living”. This was suggested by a friend of ours and we are truly grateful for this strategy as the stand-alone product assisted us with completing the project whilst also providing our audience with an idea of what they could expect to see in the final documentary.

The most recent extension to our learning resources is an online course series, Living an African Spiritual-Centred Life. It has 3 courses in total and these are aimed at those who have watched the films for foundational knowledge and are ready to put that knowledge into practice.

YF: This year you are celebrating 10 years of Ancestral Voices, can you tell us what these 10 years have been like? How have you grown?

VSA: The whole process has provided so many lessons from the people we have met and the valuable insights we have received from them. Not just the cast members, but others as well. It has been a transformational journey and one that is hard to describe as there are so many stages.

I’ve learned that I’m much stronger than I give myself credit for, travelling, filming, and editing all whilst adapting to motherhood and then (our first child was born 6 weeks before the release of the first film and our second child during the sequel). It’s really been a busy 10 Years with so many life-changing experiences.

It taught me about the power of passion and purpose. I can honestly say that I have never thrown myself into any project like this, but I was driven and for me, that was a major learning from this as it became clear that I was guided along this path and the presence of my ancestors has been strong throughout.

Since filming it has been very liberating and feels like I have much more time to implement the teachings that I have come into. Spiritually, I feel that my connection is stronger, my intuition is more developed and I feel confident with my inner guidance.

YF: I love that you have included in your research and learning materials the diasporic expressions of African spirituality. This resonates with my idea of Africa as not merely contained within the continent but extending beyond into her diasporas. To me, your and Dalian’s union, which gave birth to Ancestral voices, symbolizes that united Africa and the repairing of the fragmentation created by colonialism and slavery. Do you think that the Ancestors brought the two of you together to do this work?

VSA: Indeed, we truly believe that we have been brought together to do this work.

We also have picked up on the fact that we together represent both Continental (Dalian is born in Ghana) and Diasporan as I’m of Jamaican heritage born in the UK, so we are the epitome of Pan-Africanism as a concept.  Also, we both symbolise the masculine and feminine energies which is a core feature in African spiritual traditions as together they represent that Duality that is necessary to bring forth life. By creating these learning materials we provide the opportunity for us to collectively regain knowledge of ourselves, and awaken that ancestral essence that resides in our DNA.

YF: What is the best way that people can begin their learning with Ancestral Voices?

VSA: The Free 5 Day Video E-Course would be the recommended place to start. It acts as a wonderful introduction to those who are new to the concept of African Spirituality and helps to explain it in a clear way. The video for day 1 also explains our own personal journeys which many people have found helpful to hear.

YF: Lastly, can you tell us what African spirituality has brought to your life?

VSA: Ultimately, I have become more aware of my own potential and connection to something much greater than myself and experience daily that I am more than just my physical body. I feel more grounded in myself as a person, growing up I always felt that there was something missing. I couldn’t explain it but this void couldn’t be filled with religion. Once I started connecting with my Ancestors years ago it felt like a whole new world had opened up and it literally did. My perception of reality has dramatically changed, I am deeply aware of my connection with Nature and all the spiritual communication that takes place around me. Prior to starting this journey, I wouldn’t have been able to perceive these messages.

Every time I learn more it awakens another aspect of my being. But what is key about these traditions is not just acquiring knowledge but the practical application of it and I have found that as I have developed my practices I have become a lot more confident and grounded in my own spirituality. It’s not that I don’t have problems anymore, but I know that I do have the ability and the means to work through situations as they arise.

Loneliness is not something I experience anymore as I feel like I am surrounded and guided. These teachings have provided me with the tools to overcome feelings of anxiety/stress. It has enabled me to become more intuitive to the degree that I can pick up on people’s energies, interpret dreams and internally provide answers for questions that I seek.

YF: Beautiful. Thank you so much for all the work you do for us.

In this week's blog post I introduce you to Verona Spence-Adofo as part of my sisterhood series. Verona is co-founder of the @AncestralVoices, the place to go for your African spirituality education. Happy reading!
https://www.yemaferreira.com/verona-spence-adofo-an-interview/ 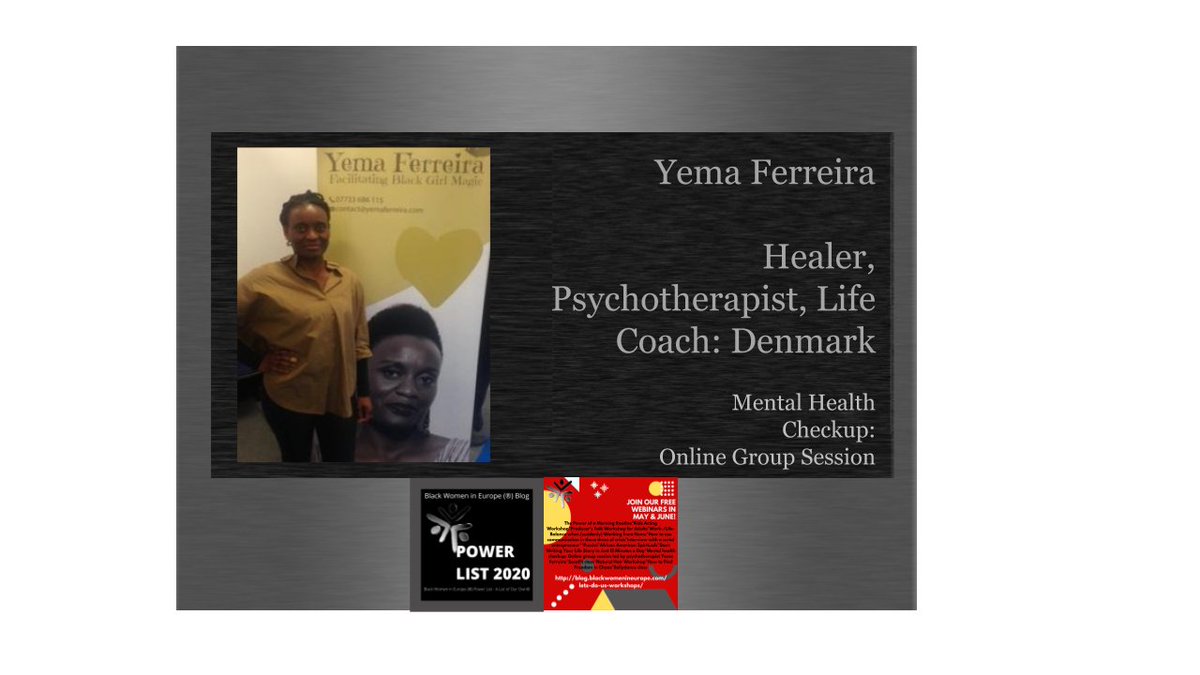 Congratulations @YemaFerreira You made the 11th Black Women in Europe™: Power List 2020 - A List of Our Own©.
#PowerList #BlackWomen